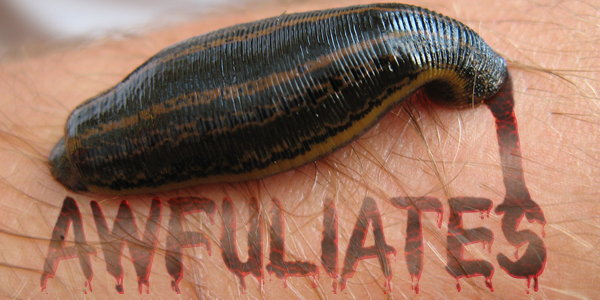 It’s amazing how candid people can be when they don’t realise (or don’t care) thatyou’re listening. Here’s a direct quote from a chap called Chris Rempel who works as an affiliate marketer. We’re not saying it’s representative, but… well, just take a look:

“Remember that most people still honestly believe – and follow – the bullshit myth about ‘great content’ and ‘great user experience’. Exploit this for all it’s worth by outranking them with swaths of cheap, shitty links – and passable content.”

Charming, innit? If you’d like to read more of this stuff, feel free to click the quote and explore his website. He’s a bit of a hero to black hat affiliates, and he’s made a lot of money out of doing this stuff – so, hey, he must be doing something right.

But not for you. And wasn’t that supposed to be the point of affiliate marketing?

Let’s back-track a little. Back in the mid-’90s, some very bright sparks (among them Amazon – lest we forget how the big A rose to such prominence) realised that the entire internet could serve as retail outposts for their online stores. Why spend a fortune advertising then converting on your site when, for a small cut, you could deputise influential webmasters in all kinds of verticals to do the selling for you? This new invention, affiliate marketing, was clever and it was a great way of attracting new customers and incremental sales without cannibalising your core business.

But it didn’t take long before an army of “get rich working from home” bottom-feeders began to play the system. Before long, people realised that they didn’t need to write great content, grow an audience or be advocates for your brand or products – all they needed to do was outbid you for paid search terms (often using your own trademarks), syphon off the traffic which was naturally headed your way, then sell the business back to you for a tidy profit. The internet is awash with sites explaining just how to do this, and these ‘affiliates’ happily trade screengrabs of their bank balances as they rake in the money they did next to nothing to earn.

In recent years, it’s got even worse. Now, the real money’s in coupon and voucher sites. They’re easy to build, they’re easy to promote and, again, they do absolutely nothing to champion your products or send you valuable new customers. All coupon affiliates do is interrupt your sales funnel, grabbing your customers at the very point when they’re about to convert (“Oh, I can type in a code here? I’ll just Google for one before checking out…”), then claiming anything up to 10% as a reward for stealing the customer you already worked hard to acquire.

It’s insanity. And, unsurprisingly, it’s starting to die. There’s an interesting case study here, describing how one affiliate has gone from making over $600k this year to making absolutely nothing once the landscape changed and all his campaigns died. Every day, more and more vendors are pulling out of the affiliate game, realising that it’s devaluing their product, it’s costing them a fortune and it may even be exposing them to massive fraud as the blackest of black-hatters launder millions through affiliate schemes using stolen credit cards they’ve purchased on the deep web for just a couple of cents. (There’s a fascinating open letter from one such vendor here, if you’re interested in delving a little further into this.) 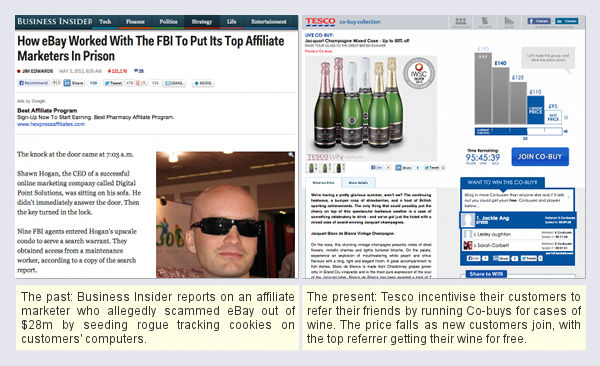 So, what’s the alternative? Unsurprisingly, it’s a return to the original spirit of affiliate schemes: the belief that people who bring you business are worth rewarding. Hence referral marketing, affiliate marketing’s less grubby cousin. Unlike affiliate marketing, referral marketing – the process by which people are encouraged to share products, deals and sites with their peers – doesn’t depend upon percentage commissions, so it’s never going to attract people who are solely in it for the money. In fact, referral marketing works best when influencers – be they bloggers, community leaders or anyone with a large network of friends – tell audiences about something because they genuinely believe the conversation’s worth having and the product’s worth celebrating.

Here’s some other thoughts and advice for anyone considering swapping their expensive affiliate programme for a more rewarding referral scheme:

1. The behavioural theory of loss aversion suggests that people’s fear of missing out on something may be twice as powerful a motivator as any hope for gain. Many referral marketing schemes offer incentives for peer-to-peer sharing but fail to consider this hugely powerful factor: “might I miss out if I don’t refer in any friends?” In eCommerce terms, it’s not really on to penalise a customer for shopping solo, but that doesn’t mean that you can’t artificially create a risk of loss by time-gating a deal or setting targets for your customers: “If 1,000 people buy before midnight, everyone gets a free upgrade” / “You’re only one referral from saving 25% on your subscription renewal”. Those are powerful incentives.

2. Affiliate marketing is supposedly all about rewarding the influencer, but it’s an incredibly solitary system (no wonder those affiliate management overheads are so high). Referral marketing allows for communal efforts, where tens, hundreds, thousands of customers can all work together to achieve a reward. Unsurprisingly, that kind of community cooperation works especially well in social media, and social’s where referral marketing really comes to life. So, instead of maintaining relationships with countless affiliates, or paying a network to do that for you, focus your resources on seeding schemes where customers can work together to achieve targets (and rewards), and watch as the marketing begins to self-sustain.

3. Unlike with affiliate schemes, you don’t need to reward everyone who participates in your referral scheme. In fact, it’s often better if you don’t. Consider these two scenarios:

a) Everyone who refers someone to test drive a BMW in the month of August gets a free car wash.

b) The person who refers the most people to test drive a BMW in the month of August gets a free car.

Inspiring your friends to consider buying a car is quite the ask. But a free car? That’s quite the reward, and it can stimulate masses of buzz. So, instead of sharing out the rewards among everyone who participates, consider rolling them all up into one grand prize for the person who performs the best. Another bonus with this tactic is that it allows you to run a public leaderboard showing who’s winning, who’s in the running, who needs to push a little harder, etc. That kind of gamification – making winners and losers out of referral schemes – is marketing gold, since it plays right to the heart of everyone’s competitive spirit, while still remaining fun and light-hearted.

At buyapowa, we’ve wrapped all these elements into our core product, the Co-buy – which boasts an incredible 45% referral rate for every customer (don’t hesitate to get in touch if you’d like to know more), and we’ve already seen it work wonders for the likes of Tesco, Pepsi, Robbie Williams and many more household name brands – all of whom are trying to do something different when it comes to attracting new customers. And, with the current state of affiliate marketing, “something different” is looking more and more essential by the day.