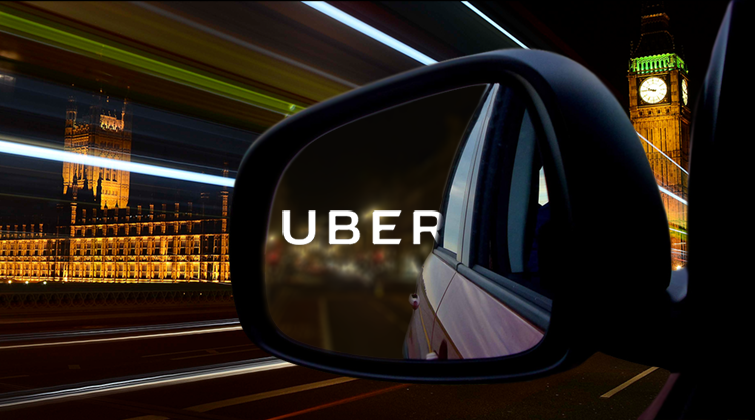 Uber became a global behemoth on the back of its referral programme, where riders were rewarded for bringing in new customers. But what was once quite revolutionary now appears woefully behind the times and unfit for purpose. Let’s take a look at the cab-calling app’s programme and assesses where they may have gone wrong… and where you could go right.

Back in 2012, if you’d walked up to a Londoner and said the word ‘Uber’, they probably would’ve started looking for neck tattoos and a copy of the UKIP manifesto sticking out of your pocket. Today, everyone knows you’re talking about the £50 billion cab company – and, what’s more, they probably know why you’re talking to them about Uber in the first place. You’re shilling your referral code in the hope of earning a free ride.

Referrals are one of the main reasons why Uber grew from tiny startup to dominant upstart. Back in 2011, Uber Co-Founder and CEO Travis Kalanick wrote that “95% of all our riders have heard about Uber from other Uber riders”; but that word of mouth wasn’t organic, it was proactively generated by a built-in referral programme. Early adopters spotted the prominent ‘free rides’ tab in the otherwise sparse navigation, discovered they could earn credit for getting other people onboard and started dishing out codes faster than a Vegas croupier.

Suddenly, every office had its own self-appointed Uber-advocate, who quickly snaffled a few hundred bucks worth of freebies by referring all their colleagues before Clive from Accounts beat them to the jump. Outside my building, here at Buyapowa HQ, some bright spark started plastering every lamp post with tear-off ads featuring his referral code. Others quickly pounced on obvious urls such as ubercredit.co.uk, deploying some basic SEO tactics to rope in as many strangers as possible.

Before long, Uber had become the giant it is today, and everyone who could be referred had been referred.

And that’s when the referring just stopped. I know it. You know it (ask yourself: when was the last time you received an invite from a friend? When was the last time you actually sent one out?). And all the evidence suggests that Uber knows it, too. Over the past few months, they’ve started promoting the programme far more vigorously than before, flashing up referral modals when you launch their app and emailing users with oddly desperate pleas to keep pushing out their codes (“Whether it’s your bestie, office crush [editor’s note: creepy] or even your granny, start sharing now.”). 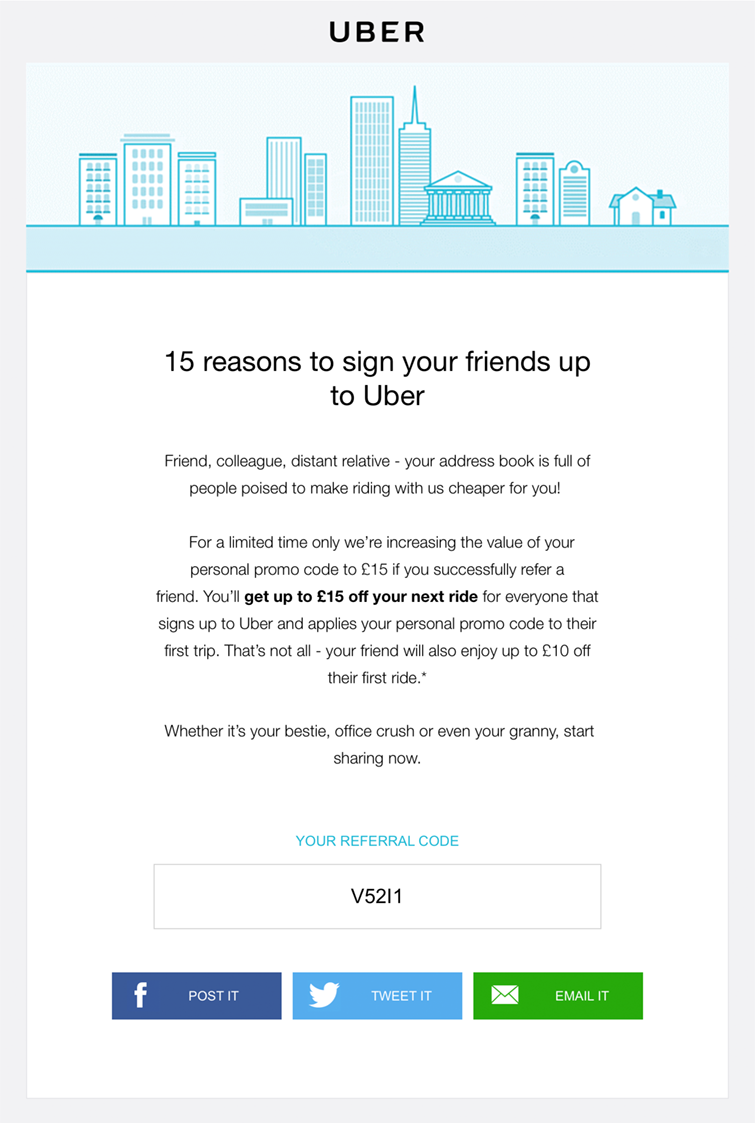 Of course, saturation is going to affect any startup that goes from zero to hero as quickly as Uber – first you hit a tipping point, then you hit a slipping point; that’s the nature of the beast. But there’s a more profound reason why Uber’s referral programme seems to have stalled – and it’s the programme itself. While it may have written the playbook many years ago, Uber’s ‘free rides’ scheme simply hasn’t evolved to keep up with the best practice and innovation that’s blossomed in the background. To put it in terms they’d understand themselves: it’s a horse-drawn hackney carriage in an age of self-driving limousines.

Now, I like Uber much more than I like walking, so I’d love to see them improve. But, in the meantime, here are four key areas where Uber’s rivals are set to steal a march on them by using technology that picks up where Uber dropped off (taxi pun unfortunately intended).

Here at Buyapowa, we power referral programmes for over 100 brands, across all kinds of industries – from fashion giants like Gap and Zalando to mobile networks like Vodafone and Telefónica, and everything in-between. And, through this wealth of experience, we’ve learned that each and every programme has to be carefully tailored to suit not just one but multiple different audiences.

First up, one size definitely doesn’t always fit all when it comes to rewards. If my friend takes a £150 limo ride from Chelsea to Beaconsfield, then I need to get something more than scratch for sending them Uber’s way. Several of our clients, including the leading global beauty subscription service, Glossybox, put sliding scale rewards to great effect, tracking the amount they pay out to the amount each referred friend spends or, sometimes, to the length of subscription they take out.

And then there’s the demographic element. On the most basic of levels (blunt generalisation ahoy, but we’ve seen it time and again over the years), women share to help their friends, men share to help themselves – and you need to cater for those simple dynamics. But the differences often get much more granular than that. In Uber’s case, there’s a world between base-level Uber X riders and fancy-pants Uber Lux types – and their friends are very likely to be different, too. So Uber needs to offer appropriate rewards and incentives to each of those segments (trust me, your boss’s boss’s boss doesn’t give a damn about £15 cab fares, but they’d probably get the entire business signed up if the Sommelier’s Table at the Connaught was up for grabs).

Now, Uber could use this kind of customer insight – heaven knows they collect enough data about us all – to personalise and customise each customer’s experience, but… no. Everyone who visits the ‘free rides’ tab sees exactly the same message, blandly advertising the exact same offer, day in day out, no matter who happens to be looking. That could change, and it needs to – quickly.

Being an app, Uber can natively tap into any sharing tool you have installed on your device, from social networks to messaging apps like WhatsApp to SMS and beyond. That’s a fantastic starting point but, once you put the word out, things go deathly quiet until the moment a friend actually takes their first ride using your code.

What brands with successful and modern referral programmes do is implement some kind of progress tracking – so you can immediately see which of your friends have clicked your link but have yet to complete their first journey and trigger your reward. For an online gaming company such as one of our clients, Fun88, that might mean your friend has created an account but hasn’t deposited any money yet. For a restaurant or bookings aggregator like Zizzi and Treatwell – two more of our clients – that might mean they’ve lined up a meal or a massage but could cancel in the intervening window. When a user sees that their friend still has a way to go, that gives them an extra incentive to check in and offer encouragement or advice – and this can play a huge role in converting referrals. Right now, it’s a lever Uber fails to pull, but it’s one they really ought to be yanking on. And hard.

Perhaps the biggest short-fall in Uber’s referral programme is its comprehensive lack of anything to stimulate multiple referrals per user. We examined the data across our entire client base earlier this year and, almost exactly in line with the Pareto principle, discovered that roughly 85% of referrals come from just 15% of participants in their referral programmes. That’s no accident: the Buyapowa platform offers two significant features designed to get our clients’ most influential customers referring not just one friend but many, again and again and again.

The first of these is tiered rewards. Like Uber, our clients generally offer a reward for the existing customer and an incentive for their friend. But, unlike Uber, they can keep things interesting by offering different rewards for each subsequent referral, or even a spot prize whenever customers achieve a certain level of success. Take a look at this video walkthrough, describing the hugely successful programme from the UK fashion powerhouse, PrettyLittleThing, where customers get an extra £20 bonus reward whenever they refer five friends. Not only does this encourage PrettyLittleThing’s customers to keep sharing with their friends, it also give the brand significantly more opportunities to interact with them, and more ways of talking about their programme via emails and social media.

It’s something Uber clearly need to implement, now that the initial magic has worn off and referral volumes appear to be drying up, but we haven’t seen any extra features added to their programme since its launch many years ago.

If you watched with the video above through to the end, you’ll have seen that PrettyLittleThing – along with the majority of our clients – have another trick up their sleeve to supercharge their referrals, and this one plays directly to their biggest advocates: gamification. If one customer brings you way more referrals than anyone else, they shouldn’t be treated just like everyone else. They should be put on a pedestal and celebrated. They should be rewarded with something extra-special for their extra-special work. We help our clients make the most of this by powering a referrals leaderboard: if you top the leaderboard at the end of the week, or month, or season, then you win something fantastic.

In PrettyLittleThing’s case, it’s free clothes for a year, but other clients have offered exclusive access to special pricing, money-can’t-buy invites to insider events or even the chance to get personally involved with the brand and its upcoming products. And the effects are often overwhelming. One programme we ran for the UK mobile phone network, O2, saw a single customer bring in over five thousand friends within just two weeks. That would never have happened if she’d simply earned the same reward over and over again, à la Uber, instead of competing against her peers to be the best.

It’s interesting that, on a recent Valentine’s Day, while Uber were pushing perhaps the least inspiring list of romantic date locations ever committed to the internet (Hyde Park? The Thames? In February?), one of their rivals, Gett, sent me an email promoting exactly this kind of gamification: £1000 in free rides for the customers who refer the most friends: 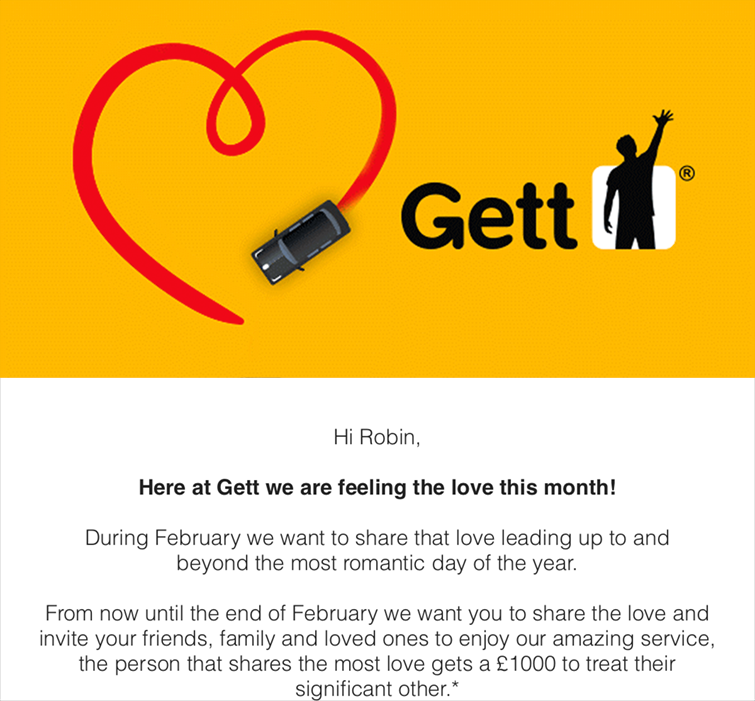 More evidence, then, that Uber is starting to run out of gas while other brands slide into the driving seat.

If you’d like to find out how your business can benefit from the next generation referral tools and tactics highlighted in this article, just get in touch.