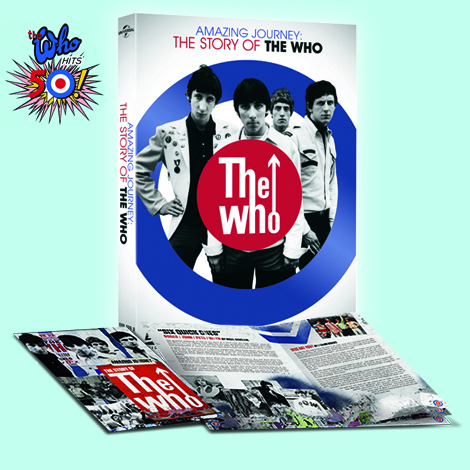 The Who’s Social Media Campaign Sells Out in Record Time!

Following the success of our recent social selling campaign to celebrate the  50th anniversary of the iconic band: The Who, we thought we would share some insights into what made this work and what entertainment brands, or in fact any brand with a large potential social audience, can learn from this promotion.

At Buyapowa, we were really honoured that The Who chose our platform to provide an amazing offer for their fans to celebrate their 50th anniversary. Of course everyone in the office pretended that they were far too young to remember the band in their prime, but of course we all had some parent, uncle or ‘friend’ (ahem!) who was a big fan. For those really young enough to be credible, education was provided by a virtual non-stop rendition of ‘The Greatest Hits & More’ on Spotify throughout the course of the campaign. We did the same during the recent Mick Fleetwood book launch, I seem to remember.

Of course, we have quite some heritage in music, as in addition to the Mick Fleetwood and The Who campaigns, we have worked with Robbie Williams and currently have an exclusive Ed Sheeran event with O2 live at the time of typing. So drawing on those examples and the accumulated experience of our founder, Gideon Lask, from his time at Universal and HMV, we think we know a thing or two about how an entertainment business can get the best from social.

So what was on Offer?

The deal was an exclusive opportunity to purchase copies of the reissue of the DVD, Amazing Journey: The Story of The Who. As well as the opportunity to purchase this for a special low price of £5, there was the chance to win some great fan prizes for helping to bring other fans to the promotion, with a top prize of a chance to win a VIP Roadie Experience at The Who Hits 50 concert at The O2 Arena, London on 17th December 2014.

Social ‘Baked In’ from the Outset

To create some excitement and anticipation ahead of the launch, we hosted a ‘Coming Soon’ teaser on a ‘The Who’ branded site. Over 500 fans signed up to be among the first to know the minute the promotion went live. Those who signed up received an email alert to avoid the risk of missing out and to have the maximum chance to win prizes by sharing with fellow fans.

Importantly, while the 50th anniversary of The Who has been extensively promoted in the press, no paid publicity was used to support this campaign or the pre-launch. Helped by some tweets from ‘The Who’ official Twitter account and a post on ‘The Who’ Facebook page, it relied mostly on ‘fan to fan’ virality.

Fans joining were encouraged to share with friends and family via social media and email, with the incentive that those who referred the most participants could win special prizes. The top prize was a VIP Roadie Experience , second and third prizes were a pair of tickets to the ‘The Who Hits 50’ concert and those finishing between third and thirtieth each won a photo pack with a photograph signed by Pete Townshend.

The promotion launched on 29th October and sold out by Friday 14th November, when the last of the special DVDs was snapped up. Over a third of all participants were referred by other fans and the winner of the top prize brought in 10 fans.

What can we learn from this?

Music promotion, like much of the entertainment industry, lends itself well to social media and The Who’s extensive legion of fans all over the UK meant that this was an ideal opportunity to tap ‘fan to fan’ enthusiasm to promote the upcoming 50th anniversary concerts. But above and beyond the numbers and boosting the bottom line, social gives brands the ability to connect directly with fans and give them access to the things that they really want, and importantly the things they want to share.

Even with a legendary band like The Who, all the ingredients of the deal need to be right to ensure success. Firstly, the offer needs to be great and ‘speak to’ fans as something they value but also have some exclusivity. A limited stock and short time period for the offer can help create urgency, particularly when fans are snapping up the deal. Quite simply, fans need to ‘buy and share now’ or risk disappointment. The creation of the pre-launch anticipation via our Coming Soon was a key part of this, ensuring that the deal got off to a good start and attracted momentum.

While no paid promotion was carried out, Tweets and Facebook posts on behalf of the band definitely help reach out to real fans. When a band communicates directly with fans, that adds to the feeling of exclusivity and privileged access. Gamification is also very important to encourage sharing. But when you are dealing with fans, its is key that the rewards resonate with the audience, such as the concert tickets and signed memorabilia on offer here.

Finally, it is important to make it easy to share and to to clearly communicate the benefits of sharing.

We thought we would end with a quote from Richard Evans, Webmaster of TheWho.com, who said: “As a legendary band, The Who appeals to fans all across the globe and to different generations. By encouraging sharing ‘fan to fan’ we looked to reach the wider audience of The Who enthusiasts, many of whom may no longer belong to official fan clubs but still hold a great affinity with the band.”

If you would like to know more about how Buyapowa can help you promote and sell via social, whether you are in the entertainment industry or any other business then please get in touch.