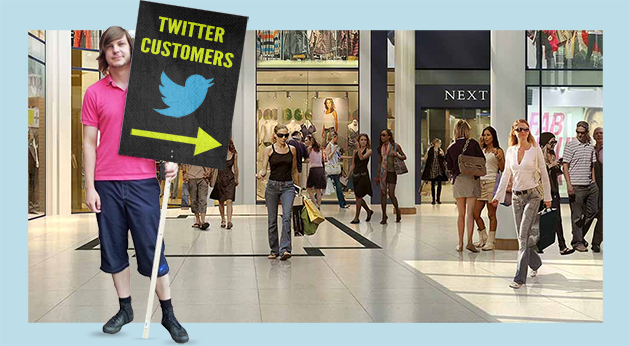 Do you work in retail? Does the word ‘multichannel’ feature in your title or your job spec? Then you probably spend every working hour figuring out how to harmonise your online and offline offerings: developing strategies, finding synergies and delivering sales across channels.

But I bet you’ve ignored social – especially when it comes to using social to deliver sales instore.

Don’t worry. It’s not too late to start, and we’re going to give you some fuss-free ideas any retailer can implement which are guaranteed to make a real difference. Sounds good? Then, let’s go…

We’ve all seen how social can dramatically expand reach, decrease acquisition costs and drive sales (just flick through this blog for 1001 examples). And social is, essentially, a digital medium – so it makes a certain amount of sense that it should be used to guide potential customers to digital destinations. But only using social to power e-commerce is like only using your car to drive to streets beginning with vowels: a massive underuse of available resources.

Of course, if you do want to use social to help your physical offering, you need to focus on footfall. Footfall is everything in the world of bricks and mortar: get ‘em in, get ‘em shopping, get ‘em coming back. So, how do you use social to increase footfall? Well, here’s two ways for starters:

Customers are always interested to hear about the latest offers available at their favourite retailers. And, without a doubt, posting your hot new in-store deals on your Facebook Page will generate a pitter-patter of extra footfall. But just broadcasting announcements is an incredibly non-social thing to be doing on social: there’s no way into it for the customer, no way for them to get involved or to have their say. And, without that interaction, social engagement quickly becomes (spit) social media: just another place to plonk an ad and hope for the best.

But give your social audience the chance to influence which offers go live in-store and, suddenly, you’re doing something genuinely social in social, and you’re driving footfall at the same time. You’re bridging that gap.

So, why not give your social audience the chance to vote for their favourite offer, then make the most popular ones reality? Because your audience have got skin in the game, because they made something happen, they’ll be considerably more likely to change out of their onesies and trudge on down to the high street when the offer goes live. Even better, they’ll be considerably more likely to tell their friends (“I asked Banana Republic for this and, blow me, they’ve only gone and made it happen!”).

By simply connecting your social audience to your physical offering in this way, you’ve transformed them into a powerful army of advocates who help design the offers you make available in-store, then rally their friends – and their friends – to bring those offers to life. The end result? Dramatically increased reach, rapid customer acquisition and significant growth in footfall.

We won’t blather on, but you can even flip this concept around by using in-store signage and ‘shelf talkers’ to drive your physical audience into the social realm, where they too can influence upcoming deals. Digitising your real-world customers? That really is getting joined-up.

Compare these two emotions: 1) the thought that everyone you know will forget your birthday, and 2) the thought that you might get a kick-ass present on the big day. Now, be honest: which one tugs the hardest at your heartstrings?

If you said number two, don’t worry about it too much, but you pretty much just diagnosed yourself as a psychopath. If you said number one, congratulations: not only are you welcome to babysit my kids anytime (are you free next Tuesday?), but you’re also in tune with one of humankind’s most elementary psychological drivers: the fear of missing out. In fact, as a species, our dread of loss is twice as powerful a motivating force as our hope for gain. And retailers can use this fundamental impulse to their advantage by offering deals which customers can make happen – but only if they act quickly and rally their friends in time.

Here’s an example: McDonald’s take to Twitter at 9am and announce that everyone can upgrade their Cheeseburger to a Double Cheeseburger for lunch that day (moar meatz!) – providing enough people sign up to make it happen by 11 o’clock. In one fell swoop, they’ve a) incentivised people to get involved by signing up, b) incentivised them to get their friends involved so that everyone can hit that all-important target and c) set their audience not one but two hard deadlines: act now, and visit a restaurant later. The result? Masses of of free social buzz, customer acquisition and appointment footfall – once again bridging that crucial social / physical divide.

Because this is a campaign that starts in social, moves into digital and resolves itself in physical, McDonald’s also have the ability to ring-fence the offer to just those people who sign up online, emailing them a voucher which they can redeem in-store. That ensures that they get all the goodness listed above without risking an expensive run on cheap burgers up and down the land. Impact and protected margins? Yeah, they’re lovin’ it.

Both these examples rely on people sharing with their friends to make things happen. They’re inherently social, not just because they start off in social media, but because they leverage the audience’s wider networks of friends, family and colleagues to increase the overall impact. But, like a Flake 99, they can be made even better by adding one simple thing. No, not a stick of chocolate (it was a bad analogy) – gamification.

If you’re a retailer, you can try this right now. Tell your social teams to hold fire on that oh-so-clever Oscars meme they were planning on posting, and see if they can’t just rustle up an army of real life customers instead. Ideally, you’ll weave in the gamification and the totalisers and the countdowns necessary to make these campaigns blaze, but a simple rub-two-sticks-together approach is going to light a pretty good fire to begin with.

When you’ve seen how huge the effect can be, give us a call or hit the ‘book your demo’ button below. And we’ll help you take it to the next level… which is where the fun really begins.

If you would like to know more about how leading brands and retailers are driving footfall in-store using Buyapowa’s referral marketing platform, please drop us a line or book a demo.