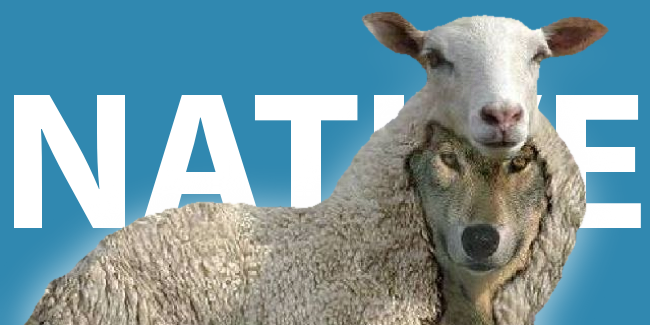 An extremely thought-provoking article appeared in The Guardian this week, written by the advertising analyst, Bob Garfield. Via a rather delicious Faustian metaphor, he accuses the publishing industry of selling its soul in its acceptance – possibly even its celebration – of native advertising: sponsored content which serves a brand agenda masquerading as editorially created copy. Or, as Fleet Street’s finest used to call it, advertorial.

We’ll not explore the ethics of native advertising here. Bob Garfield makes a tremendously compelling case, so compelling in fact that Dr Paul Marsden of Digital Intelligence Today sums up his argument as “native advertising is evil”. Certainly, there’s a sizeable wolf-in-sheeps-clothing hue to the whole practice, a tacit industry understanding that most advertising is so grubby every possible measure should be taken to ensure that the public doesn’t recognise an ad as an ad.

Which seems thoroughly barking to me.

If you’re worried that the public will find your adverts underhand or conniving, surely the answer isn’t to disguise them as something fluffier. The answer is to make them less underhand and less conniving. To do that, you need to address two fundamental problems with just about all advertising, branding and marketing today:

1) No one trusts adverts anymore. They trust each other, but they don’t trust you.

2) Technology has leveled the playing field. One tweet can bring down a brand. So, when people see an advert that tells them to do something (“Buy it, try it, live it, love it!”), their gut reaction is always: “Get stuffed.” Or (ruder) words to that effect.

Wrap those emotions up in native advertising and what are you doing? You’re justifying that mistrust and you’re offending consumers’ sense of self-determination. No wonder people often find it repulsive.

Let me contextualise that with a little trumpet-blowing, because we’ve been taking this approach at Buyapowa for some time. We’ve worked with some of the biggest publishers in the world, including Time Warner, Mirror Group, Bauer Media, Hearst and others to introduce a whole new kind of native to their portfolios. Instead of brands trying to sneak commercial messages in front of readers, we’ve powered Co-buying channels for magazines and newspapers (and online communities such as the UK’s biggest parenting destination, Mumsnet), where their audiences are empowered to choose what they’d like to buy together and for less.

Sometimes, when we’re working with brands, this choice will be from a menu of available products, or a specific range. Alternatively, when we’re working with retailers, the choice is potentially more open-ended. But, crucially, in every instance, the readers are pulling down the campaign and the products, rather than having something pushed upon them. Everything hinges upon public demand.

This public demand gives the publishers’ sales teams incredible collateral to go back to the brands and retailers to negotiate market-beating promotions (which we call ‘Co-buys’) and, of course, placement fees. The Co-buys are embedded – natively – on the titles’ websites, into their online communities, within their social channels but, rather than feeling like product placements or hard-sells, they sit sympathetically as a piece of user-generated commerce: “You asked for this, now here it is”. It’s a powerful new weapon in the publisher’s arsenal, which gives them an advantage over other media but still serves their readers, rather than exploiting them.

That solves Problem Number Two up above. As for Problem Number One – trust – these Co-buys aren’t just vanilla eCommerce propositions, they’re dymanic experiences where discounts aren’t just handed out but, instead, readers are rewarded for spreading the word and engaging their peers. The more people who buy, the better the price for everyone. If so-many units are sold, everyone gets a free extra product. Whoever refers in the most other shoppers receives their product for free. Etc, etc, etc.

This kind of gamification stimulates and incentivises massive amounts of sharing – especially via social media – and, at a stroke, solves the trust issue. Suddenly, your ‘native ad’ isn’t asking to be trusted, the readers are trusting each other. The upshot? Massive viral word-of-mouth, huge amounts of engagement and, almost uniquely for any ad format in this day and age, incredible numbers of direct sales.

I’ve got some fascinating case-studies about the campaigns we’ve powered (both from the publisher and the brand perspective), which I’d be happy to share. Just get in touch here or on Twitter and we’ll sort that out. In the meantime, remember: there’s no such thing as an evil tool, it’s how you use it that makes the difference.