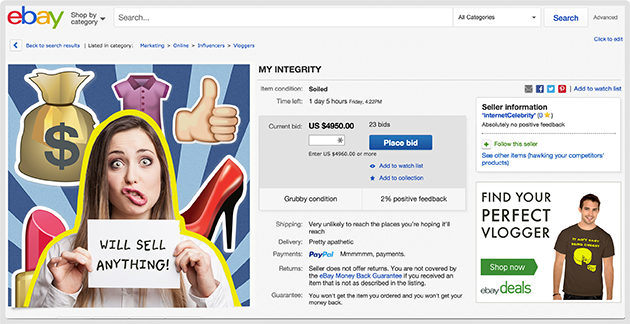 Right. Elephant in the room time. You know those influencers you’re getting to plug your products? It’s not your brand they’re attracted to – it’s your wallets.

Your big, bulging wallets, as it turns out. Now that influencer marketing is the fastest-growing method of customer acquisition, it’s become a big-money game. Twenty-five percent of brands are spending over half a million dollars on it every year. Five percent are spending over $5m. That translates to about 200 bucks for every half-arsed “Hey, guys – check out this amazing thing I’ve discovered” and ten grand for every “I just spent a day testing the latest doo-dah from thingumabob.”

And here’s the thing: it’s not their fault. Bloggers gotta eat, tweeters gotta tweet. The problem isn’t so much that those all-important influencers have finally woken up to the value of their influence (given that 3% of influential individuals generate 90% of impact online, did you really think they wouldn’t charge for that?), the problem is that the tools you’ve given them – and their audiences – are woefully unfit for purpose.

I’ll explain. Like any fun thing worth talking about, there’s three people involved when it comes to influencer marketing. There’s you, the brand. Hello. There’s them: the influencer – be they a YouTube star, a national celebrity or just some dude with a weirdly large number of Instagram followers. And, finally, there’s the audience. Oh yeah. Them. And, time after time, it’s the audience that gets totally forgotten in this little threesome. It’s easy to see what you get: exposure, endorsement, enthusiasm, energy and all the other ‘e’ words that look great in your weekly reports. And it’s easy to see what the influencer gets: $s, £s, €s and all those other symbols that look great on a bank statement. But the audience rarely gets anything… other than bored.

That’s why, to be frank, the actual material you get back from the influencers is often forced (at best) or lacklustre (at worst) – because, deep down, they know that these posts, videos and photo ops are just irritating adverts, sullying the purity of their regular content. And, ever since The Man got involved and brought in laws forcing influencers to signpost their sponsored posts (“I got paid for this, but you won’t get paid a penny to watch it!”), it’s become even more uncomfortable for everyone involved.

The solution? Well, I alluded to it a moment ago – you absolutely have to ensure there’s value for the audience, too. And that means a call to action that’s slightly more alluring than “click through to acme.com and make sure you bring your credit card with you”.

Here’s an example. We recently powered a campaign for a major European mobile phone network, fronted by a online megastar who’s garnered over a billion views on YouTube. Most brands would be happy with that: mention our name in a vid, maybe drop a link in the description, job done, great. But this brand were smarter. Instead of seeing the influencer as the be-all-end-all, they cleverly realised that, actually, he was just a gateway to his audience; and, for the campaign to really work, they needed to involve that audience on a much deeper level.

They started by getting the influencer to ask his viewers and subscribers what kind of product they’d love to see from the network (in this case, a brand new mobile plan, specially tailored to suit this very particular demographic). Then the network went away and made that product exclusively available to his audience and their friends, demonstrating that they didn’t just see them as a giant trough of money waiting to be slobbered up but real people, with real opinions and real needs. Needless to say, this made the job significantly more palatable for the influencer: instead of guiltily selling to his audience, he was giving them something special and unique. He was actually doing something for them, not merely getting something from them.

It didn’t stop there. When the product was ready to go, instead of getting the YouTuber to post another video linking off to a bland ecommerce page, they ran an inspired and inspiring customer-get-customer campaign on the Buyapowa platform, meaning that every viewer who did click through to sign up for the plan was equipped and incentivised to go out and recruit their friends in turn. The more friends they got on board, the more exclusive rewards they’d receive – not only from the brand (in the form of bonus minutes, texts and data), but also from the influencer – which is what had got them there in the first place.

Those rewards took three forms: personal, gamified and communal. The personal rewards meant that, as they did a better and better job of getting their friends to sign up for the plan, they’d get more and more back from their hero: exclusive content, personal phone-calls and messages, even (and here’s where the gamified rewards came into play) the chance to hang out with him if they got more friends involved than anyone else. The communal rewards meant that, as everyone collectively got more friends signing up, the influencer would release more and more videos: exclusive dares and confessions, rare footage from his archives – the kind of content the audience actually wanted to see, not just another promo shilling for a brand.

And the end result? A dramatic magnification of the influencer’s already-enormous reach, and an unprecedented conversion rate as the audience became influencers themselves, bringing their friends on board just like their hero had brought them on board at the beginning.

That’s just one example, but the lessons are universal. If you’re looking for someone to influence the masses on your behalf, you (the brand) and they (the influencer) are just the start. Because the most influential element of all – the element that actually influences the influencer – that’s the audience.

So if you want to talk about influencer marketing then just get in touch and we will be happy to share what we learned from working with over 100 of the World’s leading brands and retailers.