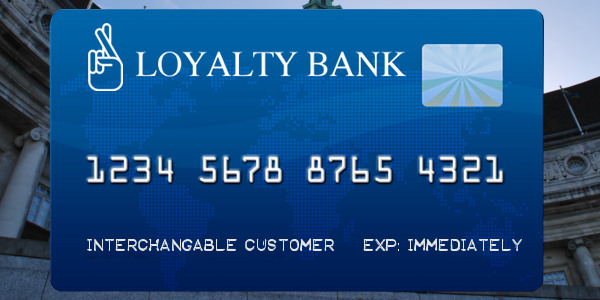 The digital age hasn’t been kind to the financial services industry. On the one hand, online banking and self-serve product applications have facilitated enormous growth and resource streamlining. On the other hand, there’s no such thing as loyalty anymore. A quick scan for ‘credit cards’ on Google gives a top search result for a price comparison site. And the second result? Another price comparison site. That’s before Wikipedia’s even defined what a credit card is.

And that’s a big problem: when customers have become ferocious deal-hunters, and when the very best interest rates and fees are only a click away, it becomes almost impossible to compete without stripping back your product to its bare bones and scrapping it out to offer the lowest prices. And, when you’re racing to the bottom, it’s pretty hard to keep your customers with you – the moment you’re not the cheapest in town, you might as well quit town altogether.

In recent months and years, FS companies have tried to offer value-adds as an incentive to lure – and retain – customers. It’s the “I might not be as pretty as the girl who just moved in next door, but I know how to iron your shirts” angle, and it’s similarly humiliating. Take Bank of America’s oddly-titled BankAmeriDeals affinity scheme, where they offer small percentages of cashback to customers who shop with partner brands using their BoA card. In principle? Great. That’s a value-add: something for nothing for their loyal customers, and a reason to stick with the bank as a credit card supplier. In practice? 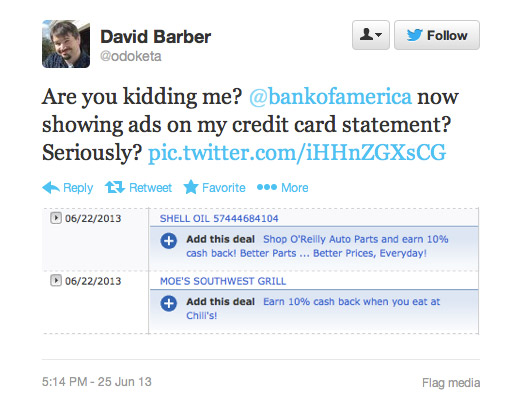 Not _quite _so user-friendly, after all. No wonder BoA felt the need to reassure David four times that what he was seeing on his statement wasn’t ads (let’s be honest, though – it really was):

To their credit (pun intended), at least Bank of America are offering a sympathetic service, and we’ve certainly encountered more positive responses from customers. Admittedly, only four on all of Twitter in the past month, but that’s four more positive tweets than they might otherwise have had. And it’s more positive than the reception to Bespoke Offers, Barclaycard’s Daily Deals-style site, which offers customers tailored savings on the things which really matter to them. Except, it really doesn’t. It offers all of them the same generic offers (and pretty uninspiring ones at that) – something which hasn’t gone unnoticed by the public: 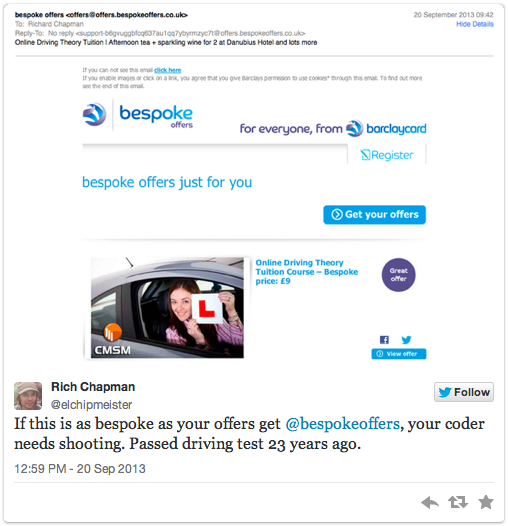 This jump to get into the Daily Deals market isn’t unique to Barclaycard, either. In the US, there’s Visa Discounts, which offers very modest savings at partner retailers (which seem rarely to be compatible with any existing offers, rendering them pretty uncompetitive), while Mastercard have teamed up with Local Offer Network to power so-so deals for their issuers’ and merchants’ customers. Meanwhile, J.P. Morgan have gone the whole hog and bought Groupon clone Bloomspot for a crazy $35m. The assumption is that the banking giant already knows what kinds of products their customers are buying, so can tailor deals for them. The reality, we suspect, is that they’ll offer exactly the same deals as everyone else; deals which start in the world of affiliate marketing and get farmed out to anyone who’ll take them. But, hey. Watch this space.

Obviously, with everyone under the sun jumping on board the (cold, stale) gravy train that is Daily Deals, no one’s really offering anything unique enough to engender true loyalty. But that doesn’t mean that some companies aren’t trying. American Express are certainly doing something interesting with their CardSync programme, where customers can directly purchase items simply by tweeting dedicated hashtags (albeit after a somewhat cumbersome setup process):

Now, don’t go thinking that this is anything new. Portland’s Chirpify have been powering direct transactions (and donations and P2P money transfers) via Twitter (and Facebook, and Instagram) for a long time now, and Amex’s version looks a little meagre by comparison. But, in terms of  innovation within the world of FS affinity schemes, it’s certainly new and unique – and at least they’re trying.

As are companies outside the FS world but very much inside the loyalty world, companies who feel exactly the same pain when it comes to attracting and retaining new customers. In the UK, the supermarket chain Waitrose have side-stepped the same-old-same-old points-based loyalty card programme adopted by all their competitors and introduced a scheme which offers real value and interest to their customers. From the chance to win a whole year’s shopping to free hot drinks each and every day at the chain’s instore cafes, the myWaitrose programme doesn’t simply offer generic incentives, it makes customers feel like real and valued members of a community.

Similarly, Sears have thrown everything at their immense ShopYourWay undertaking, which replicates the functionality of social marketing platforms like Pinterest and Fancy, adds Epinions-like ratings, kitchen-sinks in sweepstakes and live customer service, plus celebrity-curated product lists, community chat and recommendations, exclusive deals, invites and previews, loyalty points, and on and on and on…

It’s an impressive commitment to affinity, so overwhelming in its scope and so much more immersive than its competitors, we can definitely see it becoming a way of life for some customers. Which, after all, is supposed to be the point of programmes like these.

But let’s step back for a moment and think about where the true value lies – or, at the very least, where it could lie. At the end of the day, financial services, especially credit card providers, are brokers between customers and brands. They facilitate commerce, they oil the progress of Product A into the hands of Shopper B. Now, you could argue that simple daily deals do the same thing – they get products into shoppers’ hands – but that’s not how credit cards work. You don’t walk into a store and take whatever products they want you to buy. You browse, you choose, you drive the deal. And that’s how affinity schemes should work, too. The credit card providers shouldn’t push prescriptive deals onto customers, they should help customers get the deals they want. They should go back to brokering, because brokering is what they’re best at.

That’s why the ultimate affinity scheme for a financial service brand would start with them asking their customers what benefits they’d like to see. Then that intelligence, that weight of authority, could be used to leverage truly bespoke deals from suppliers: “We’ve got 50,000 customers who’ve told us they all want a deal on Nissans – how are you going to keep them happy?”. That’s the first part of getting this right.

Part two, though, is don’t give up all the goods from the outset. Make your customers earn their rewards by asking them to share your offers with their friends, attracting new people into the fold. The very best way to achieve that is by making the deal better and better as more and more people join, be that via a continually decreasing price or by adding more products into their basket at no extra cost. If I, as a customer, know I can get a better deal just by bringing in my friends, I’ll post about it on Facebook and tweet about it on Twitter until I’m blue in the browser.

And here’s part three. If you really want to grow your customer base, you can’t restrict these offers to your existing userbase. A Citibank affinity scheme, for example, shouldn’t solely be open to Citibank customers – that’s the mistake everyone makes – it should be open to anyone. That’s how you get the viral exposure, that’s how you spread the word. But you need to reserve a special privileged layer of functionality for people who do make the switch, an incentive to sign on the dotted line. We’ve already discussed how deals could get better as people share with their friends. Why not make it so that anyone can join, and anyone can share, but the Citibank customer who brings the most other shoppers into the deal gets their Nissan for free? That’s a huge incentive to sign up for a credit card or a current account. Alternatively, you could lock down other elements, such as the requesting we mentioned above. Anyone can buy and ‘come to the show’, as it were. But only your signed-up customers get to ‘go backstage’ and request the next deal.

What all this does is turn online shopping – a notoriously solitary activity – into something inherently social and a whole lot more fun. Ultimately, that drives business, it accelerates customer acquisition and it fuels affinity. Here at Buyapowa, we’ve helped countless retailers, manufacturers and brands, from Tesco to PepsiCo, transform their relationships with their customers by using exactly these tactics. But the opportunity for Financial Services is even more immense. This is an industry that’s all about retention and value-adds. Facilitation, rewards, understanding the customer: these things are part of the DNA of every FS brand. Social-Commerce not only gives them the opportunity to present an affinity program which is relevant and makes sense coming from an FS business, it also give them an opportunity which works.