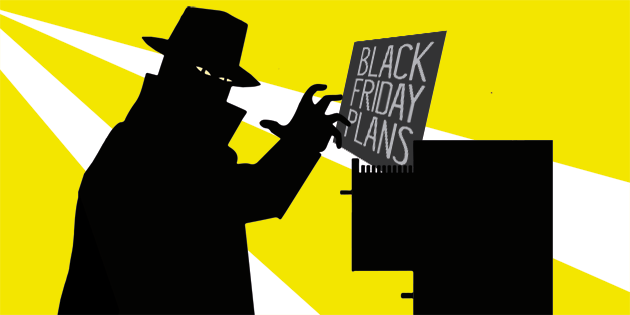 Last year’s Black Friday took everyone by surprise. Not only did retail records get smashed faster than a discounted coffee maker being beach-balled around a store by MANIAC SHOPPERS, those retailers who didn’t get their plans in place repented the error of their ways by planning a long and fruitful retirement begging for change in the nearest gutter.

No one’s going to make that mistake again this year. But, this time, it’s not about what you offer customers (uh… discounts, obviously – that’s kinda the point), it’s about how you’re going to make your Black Friday / Cyber Monday event stand out among a million identical campaigns from your rivals. (Hint: that’s hulking great banner saying ‘50% OFF’ probably ain’t gonna cut it when the shop down the road is already getting some make up that scream ‘75% OFF’, and the big box store across town is seriously contemplating ‘ALL THE MONIES OFF!’.)

“When everyone advertises the same message the same way, we’re all going to get seriously jaded seriously quickly.”

It’s kind of a no-brainer that, when everyone advertises the same message the same way, we’re all going to get seriously jaded seriously quickly. So the smart money’s on the one channel that’s been proven to cut through the cheap-cheap-cheaping of the retail flock and really get through to customers: word-of-mouth. They won’t listen to you, but they will listen to their friends.

As insiders in the courts of some of the world’s leading brands and retailers, our spies have caught wind of some super-exciting plans which leading players are already mapping out to make sure their Black Friday campaigns don’t just get their existing fans and customers shopping, they get their friends shopping, too. There’s some clever stuff coming, and we thought we’d share it with you here. Maybe it’ll get you thinking about your plans for Black Friday ’15, and what you’re going to do to make sure it’s not followed by a very, very black Saturday.

If you want to know more about these top secret plans then don’t ask us, because we can’t tell you anything ;).